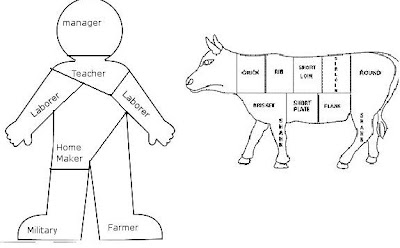 (Sorry in advance for the yellow highlighting, changing it here and/or in my original document just won't work so I apologize as it looks quite ugly)

First a related note on the efficiency movement which relates to social efficiency; from wikipedia, "The Efficiency Movement played a central role in the Progressive Era in the United States, where it flourished 1890-1932.[4] Adherents argued that all aspects of the economy, society and government were riddled with waste and inefficiency. Everything would be better if experts identified the problems and fixed them."


As explained and explored by many, I am going to explore it in a few posts.

This first one is the least "shocking".

From "Education for social efficiency: a study in the social relations of education" By Irving King...
"It was devised as a means of insuring that the child should learn certain things which he would not be able to learn satisfactorily if he were left to pick up things for himself by imitation and simple contact with the life that was going on daily about him. As culture increased

in complexity, more and more of the burden of education had to be shifted to formal agencies, specifically to the school"
I wonder how much people can learn without "formal agencies". Thomas Jefferson and Benjamin Franklin sure were intelligent and successful without a full formal education, as are many home-schooled children.

The last century, however, has immensely increased the reach of human life. Man's vocational activities have broadened in their scope. More and more has he been led out of the narrow, primitive relation of family and neighborhood and drawn into contact with larger and larger groups of people...While, therefore, the old-time society educated its children informally, the new social order presents such difficulties of social adjustment that the present-day child is scarcely able to fit into it, and live a really satisfactory life, unless these new social relations are made a more conscious element in his formal training. He needs, in other words, a distinctively social training. The social relations and opportunities of school and neighborhood must be utilized to prepare him for the complex life he must live
The movement of social efficiency(and often progressives) saw the new industrial, urban world as so far removed from family and community that the institutions had to teach people how to socialize and had to make up ofr lack of family and community. This brings to mind my readings of John Taylor Gatto who I recall mentioning the removal of family and community, replaced with state controlled schools.

Indeed, more and more it becomes apparent that modern society needs to be humanized and moralized, if it is to endure, just as this was needful in the simple primitive community. The moralization of the primitive community was accomplished without any definite reflective purpose. It gradually developed under the influence of natural selection
Call me off but saying society needs to be humanized and moralized is, for lack of better terms, creepy. I just don't feel the state should be moralizing the population.

Using heavily connotative words (such as "monster", "unify") sways and pulls at the reader's emotions to almost say, yeah, I agree, let's save the world from destruction! However, the evil behind this is social control and management, as if people cannot do it themselves and need the status quo, the elite, those in power, to manage them.

All of this must be accomplished through education, meaning by education the entire process by which human nature is trained and instructed. And this education must be largely wrought out through the school. The ideal of a social life adequate to modern conditions of living must take its place as an object of explicit and conscious training, just because it is too complex and difficult to attain in any other way.

And here, my friends, is social control through indoctrination...oops I mean brainwashing....wait no, I mean education. Family and community can no longer provide what they once did, so let the state decide whay to provide, and do it through the school system.

If it is to be adequately met it must be through a complete reconstruction and utilization of every element and factor in the educational process.

Social efficiency cannot be escaped as it will infiltrate every aspect of education.

. For the lower classes there already exist large numbers of "nature readers", which boys and girls of the country need quite as much as do those of the city, that their eyes may be opened to what is going on about them in forest, field, and stream.

For the upper classes there are masterpieces of literature which present the idealistic side of agriculture and interpret nature from the standpoint of country life.*

This is saying that there will be a seperate education for the lower and upper classes, further stratifying our society. Also, the mention here of "country life" and "field and stream" relates to an idea I will discuss more later; that education should be so differentiated and specialized that it only teaches from the narrow view of the child's life knowledge (i.e. a country child would only learn of country topics such as farming and nature) and that view prepares them for a pre-set position and career in life.

This book does not go as deep and dark into social control and efficiency as others but it is a good introduction. It is not full of shock-and-awe and you almost find yourself agreeing with it until you realize it is about control, and not freedom, which is against social justice.