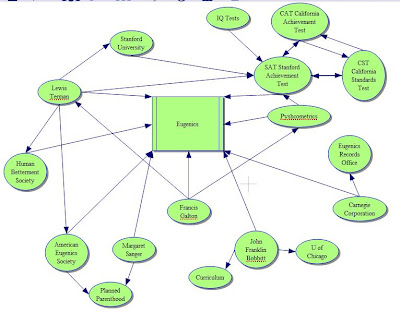 Sorry for the blurriness but here it is on outline form....interesting info and connections...

He was a member of the Human Betterment Foundation, a California-based eugenics group.g

i. Normal Schools- http://en.wikipedia.org/wiki/Normal_school has some info; Prussian education began the idea of teacher-training schools which we then “stole” and called “normal schools”; they modeled Prussian education ideas. Terman was principal of the Los Angeles Normal School in 1907. A good website for info, http://www.indiana.edu/~intell/terman.shtml

Go to http://www.eugenicsarchive.org/eugenics/list3.pl and/or search wikipedia for info.

The Cargenie Corporation funded eugenics and well, to put it simply, that is a bad thing! The Cargenie Corp. also now funds and/or is connected with “Teachers for a New America”, McGraw Hill textbooks, The Education Trust, Achieve Inc (a school testing Co.), ETS (another testing co) and many more. Curious, no?

Coined the term “IQ” and to quote http://www2.facinghistory.org/Campus/rm.nsf/0/D9F412371E532A3485256FFD0007CE74 , “After the war Terman promoted the new IQ tests to school districts across the United States. He created the National Intelligence Tests for grades three to eight and the Terman Group Tests for grades seven to twelve. These tests were the most popular IQ tests used in public schools during the 1920s and 1930s to assist in placing students into ability grouping or tracks. Terman has been referred to as the "father of tracking."” And, “Terman believed the IQ test measured a relatively fixed and hereditarily determined intelligence and that there existed marked differences in intellectual capacity between different races. Terman was an active member in the American Eugenics Society and the Eugenics Research Association throughout the 1920s.” He was a professor of education and psychology at Stanford University from 1910-1946 and he helped create the SAT or Standard Achievement test. In California, students took the SAT-9 (not to be confused with the college entrance SAT) which became known as the CAT/^ (California Achievement Test) which then became known as the CST (California Standards Test.) http://www.oise.utoronto.ca/legacy/research/edu20/moments/1916terman.html?cms_page=edu20/moments/1916terman.html has a lot of good info on Terman. He was influenced by eugenicist G Stanley Hall.

To quickly divert to SAT/CAT/CST….according to the unpoblushed works of the California Department of Education and Edicational Testing Service, 2002, CST’s will be used as a common anchor between SAT/9 scores obtained in 2002 and CAT/6 in 2003. The statisctical correlation of SAT/9 and CST of High School Math, for example, ranges from 0.63-0.85. A correlation of 0.8 or stronger is “strong” and below 0.5 is “weak” so 0.63-0.85 is “somewhat strong” to “strong”. So the SAT originating from eugenics, intelligence testing, and racism, the SAT/9 must have some intelligence and racial bias (google it- it does) and thus the CST must. Read http://www.gutenberg.org/files/22425/22425-h/22425-h.htm for the first SAT test questions….an eye opener!

And another good source on Terman, http://www.stanfordalumni.org/news/magazine/2000/julaug/articles/terman.html

We know planned parenthood is a program offering prenatal care, birth control, and abortions to women and is a supporter of women’s rights. But in a nutshell, the origins of Planned Parenthood are eugenic. Their founder, Margaret Sanger, has said, “"The most merciful thing that a family does to one of its infant members is to kill it." And “"Birth control must lead ultimately to a cleaner race."” And "Eugenic sterilization is an urgent need ... We must prevent multiplication of this bad stock." And "Our failure to segregate morons who are increasing and multiplying ... demonstrates our foolhardy and extravagant sentimentalism ... [Philanthropists] encourage the healthier and more normal sections of the world to shoulder the burden of unthinking and indiscriminate fecundity of others; which brings with it, as I think the reader must agree, a dead weight of human waste. Instead of decreasing and aiming to eliminate the stocks that are most detrimental to the future of the race and the world, it tends to render them to a menacing degree dominant ... We are paying for, and even submitting to, the dictates of an ever-increasing, unceasingly spawning class of human beings who never should have been born at all." And lastly “"Give dysgenic groups [people with 'bad genes'] in our population their choice of segregation or [compulsory] sterilization." Sanger was a member of the American Eugenics Society.

What does this have to do with education? Not too much but it is just a shocker and it does involve children.

To quote wikipedia, he said in regards to students, “They should only learn those skills which were necessary to fulfill their personal tasks” and he believed “girls had a very different future than boys, so they did not need the same sort of education.” He said, “Educate the individual according to his capabilities”. This requires that the material of the curriculum be sufficient various to meet the needs of every class of individuals in the community and that the course of training and study be sufficiently flexible that the individual can be given just the things that he needs. I think of this as NOT being individualized/differentiated instruction in the way we mayhthink of it but, as it says in his quote, teach just what someone needs…no more. To me that means do not further the capacity of their minds, bringing about a Prussian ideal of teaching just what that person will need to know- not what they want to know- to ensure they are not intelligent enough to cause a ruckus or be “too educated”. In 1909 he spoke about “Practical Eugenics” at the Child Welfare conference , lead by eugenicist G Stanley Hall (http://www.clarku.edu/micro/freudcentennial/history/1909childwelfare.cfm)

“In this vein, renowned University of Chicago scholar and education expert John Franklin Bobbitt remarked of the northern European elite, "one must admit the high purity of their blood, their high average sanity, soundness and strength." 6 Such assertions of genetic supremacy, propagated under the scholarly rubric of hereditary intelligence and character, 7 jangled through academic echo chambers on both sides of the Atlantic 8 with surprisingly little resistance. Throughout the early 1900s, eugenicists labored to devise objective methods of measuring and quantifying valued traits.”

To quote Wikipedia, “He was the first to apply statistical methods to the study of human differences and inheritance of intelligenceand introduced the use of questionnaires and surveys for collecting data on human communities, which he needed for genealogical and biographical works and for his anthropometric studies…He was a pioneer in eugenics… His book, Hereditary Genius (1869), was the first social scientific attempt to study genius and greatness. As an investigator of the human mind, he founded psychometrics (see my psychometrics post to see relation to education).”