I was researching if a textbook of interest was "CA approved" and found an article about textbooks, recalling our tough adoption standards, how expensive books are, and how politicized they've become. I remember reading about the ludicrous procedures to adopt a textbook before. The article can be found here http://www.keypress.com/x4388.xml but here's some key parts....bu first a quick, related diversion. Scripted Curriculum (see my word cloud on the left side of my blog home page, click on scripted curriculum, for more info) is being fueled by big business and the government. In California, the Board of Ed adopted for the entire state, two scripted reading programs; Houghton Mifflin and Mc Graw Hill Open Court. While it is not "mandatory" that these two books be used, the state (hello, that's where the $ comes from) refuses to pay for any other reading curricula. So essentially, Houghton Mifflin and Open Court are all a teacher can use. And, to further use my CTA reference here, (http://archive.cta.org/CaliforniaEducator/v6i7/Feature_4.htm) this "research based" or "scientifically based" curriculum, "proven effective" by the national reading panel, "proved" the effectiveness but did not include any English Learners in their study (California's student population was 24% in 2009) and the panel included only one reading teacher). I'd say that research is not very applicable, "bunk".

The California Board of Education has taken a step, called "drastic" by The New York Times, of adopting two scripted phonics-based reading programs - Houghton Mifflin's A Legacy of Literacy and McGraw-Hill's Open Court Reading - for the entire state to use for grades K-6, starting in September. While the state does not require all schools to use either curriculum, they are the only ones the state will pay for.

California and 21 other states mandate which textbooks can be adopted in their schools. This is intended to ensure alignment between curriculum, teaching practice, and state testing. But only California prescribes the specific form of presentation, pedagogy of instruction, textbook format, use of technology, and permissible references to professional teaching standards in state-adopted texts.

"California's textbook adoption requirements and processes are the most restrictive and political in the nation," Rasmussen said

Great, politicians and special interest groups already basically run education but they really get their hands in deep in CA. Gotta love it...no wonder our test scores and grad rates are abysmal, and no wonder our spending is so high.

The consequences of this can be dire, Rasmussen warned. During California's last math adoption, when the state mandated algebra for all 8th graders, it adopted just two algebra textbooks, both developed for older students. "The result? California schools now fail massive numbers of students in 8th grade algebra—proportions far in excess of failure rates in other states," Rasmussen said.

See, I told you...shiny pretty sparkly textbooks that "the powers that be" cd.ronies...errr...buddies published might look nice and cost a pretty penny, and tickle the fancy of all special interest groups, think tanks, lobbyists etc you're paying favors to, but what they forgot to do is instruct, and at an appropriate level. But don't they look pretty? And thanks for the under the table favor, buddy.

"No other state in the country surpasses California in discouraging the use of instructional technology," Rasmussen said. This leads many large publishers to self-censor technology applications from their books and undermines the state's goal of preparing students for success in a 21st century technology-centered work environment."

So we get pressure from all sides to modernize, use more technology and 21st century learning and yet our textbooks lack it, and many schools ban use of anything but the textbook- no supplementals. So we are doing a disservice to our students and our future.

Students in textbook adoption states perform worse than those in states without textbook adoptions when comparing performance on the 2000 National Assessment of Educational Progress exam for 8th grade math. The average scores between adoption states and open states differ by 10 points—a difference significant enough that had California scored 10 points higher, it would jump ahead ten states in the rankings.

Take that, Houghton Mifflin. I knew I despised your scripted curriculum, instinctively knew it was "bad" for kids for a reason. You claim your methods are researched based but researched based to what....perform sub-par to the rest of the nation? I missed that in the fine print. 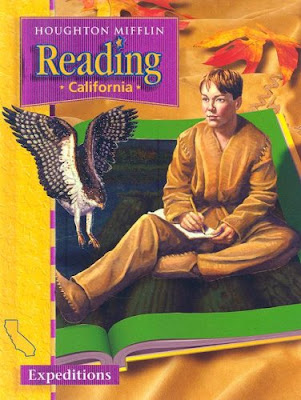