My schooling grade 5 and beyond 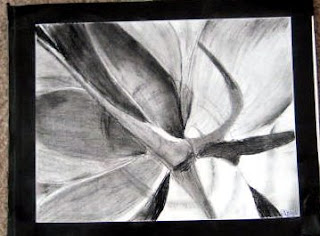 my art although this is from last year and not high school.

My 5th grade teacher was pretty "neat" although all I remember of 5th grade was using a magnifying glass to burn designs in wood, and reading a lot. My teacher did encourage my reading and writing hobbies which really made me happy. I run into her every few years and she still asks if I am reading and writing. See this is the teacher I want to be, one who not only remembers her students 20 yrs later but remembers things about them and still encourages them!

But 6th grade crushed any joy I had. I had Mrs. A and she was pregnant- again- I think she was on her 5th child so she was out for a month or so. But when she was there, we did not get along. I corrected her pronunciation of austrolopithecus (however you spell it), and told her to just give me the test on Harriet the Spy as I'd read the book ten times and didn't see a need to take a month to read it in class, for my 11th reading. Also, when we had an activity to read a 200 page book of our choice for a month, I chose the Clan of the Cave Bear series which I had to not just get her approval of, but parents an the entire school board. It had sexual content, and was too many pages for a 6th grader to ever read... well, I read the series. Mrs. A also accused me of cheating off of my friend who was actually trying to cheat off me. My friend was a struggling C student and I am A student (except in math) and she ended up passing grade 6 with all As and me with all C-. I bet I'd have failed but Mrs. A likely wanted to rid of me and pass me on to the middle school. And yes I was a C student in math, I still wonder if I have discalculia. I had to go to rsp/special ed for math intervention. That teacher was really nice though and also remembers me 20 yrs later.

Which reminds me about 4th which I forgot to include...GATE, poetry, mean teachers. So I signed up for GATE but they wouldn't let me in, my IQ was 137 and they think it may be higher but being legally blind in one eye and damned near close in the other, my motor skills always have lagged behind my years. Well my mom had to fight for me to get in GATE because of my missing so many days of school the previous year. It's sad that you must fight to get in to GATE. Then..I won a district wide, number-1 spot award for some poetry I wrote. My 6th gr teacher Mrs. A refused to enter my poems in 6th grade because she felt I had to have cheated and had my mom write them, no child could compose poetry like that. Talk about crushing, I didn't write poetry again until high school. Then my 4th grade teacher was as you know, not so nice. When I was about 25 I went to substitute teach at my old school and she was next door so after school I thought, let bygones be bygones, I'll say hi. She had the audacity to say "yeah I remember you. I remember your sloppy writing. You know, I could have held you back, some people wanted to but you had such good test scores. I hope you write more legibly today".

Anyways, I barely scraped by 6th to get into middle school. I remember little of it as I was a scrawny weakling who has eons away from puberty, and had coke bottle glasses so... I was teased and had no self esteem, and in a place all about popularity and not learning! I remember being ill a lot. And running....slowly... and hating P.E. as I always had as I hate group sports, since, well, you try and be blind with horrible depth perception and be told to play ball with hormonally crazed kids twice your size. I dare ya. I liked my 7th grade English teacher but humiliated myself when a witchy girl claimed I'd cheated on my test and went to tell the teacher. I was so scared that I stayed in during lunch to talk to the teacher, crying that I had not cheated and she had lied because she liked to tease me. My teacher said, "she didn't tell me that, she asked when class was ending".

I recall 9th grade in high school because all my friends had moved or more likely, gone to juvi or gotten pregnant as for some reason those kind of kids gravitated to me in middle school- it wasn't the punks and druggies making my life miserable, but the preppies and jocks. Anyways I came home every day crying. I felt like a number in school and had no interest in school spirit and sports and all that crap. My mom taught at a continuation school and I was counting down the days to age 16 where I could apply to her school to get out of mine as anything had to be better! I also threatened and considered dropping out but couldn't bring myself to do it because education was everything in my family. Then I somehow found drama. These people seemed as unique as I was! While I never had a single role in a play, I still enjoyed my time helping out for months before a performance. I'd often be an extra, a face in a crowd on stage but I loved the exhilaration of being on stage. I also took as many art classes as I could, often repeating classes for no credit because art kept me stable and let me be me. Some of my art was even displayed in the district office and the teacher's home! I never won the district art show but was a runner up.

I took an AP course, just once. I took and completed AP English and passed the test. I dunno if I enjoyed it or not but most of the students were snobbish and clique-y and spending so much time and effort not on learning but on prepping for a test seemed pointless. I enrolled in AP French IV and Art but refused to take the test which confused everyone but allowed me to, well, not take the test! I should have challenged myself more in high school. Granted I was in the top 5% of my class but most were easy classes. I think ,why didn't I challenge myself, I had the capability! I think I was so disenfranchised by the schooling complex by then, without really knowing it. I hated easy work but even the hard word subscribed to the same old routine of testing, textbooks, lectures, set ideas and set lessons.
Posted by 3rseduc / handsinthesoil at 1:44 PM