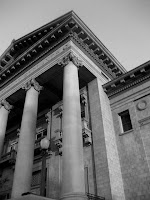 Anyways, I ignored all these brochures in the mail for colleges; I was star material being in the top 5% of my class, and with an undeclared major to boot. I instead applied to the two colleges closest to home, one a state university and the other private. They were of course very different in price, but with scholarships and loans, ended up equivalent in price. I did the little shindig where you tour the campus and do prospective student activities, and that helped seal the deal for my choice. The state university had nice facilities but focused on sports, and they finished up the tour with a free lunch of soda pop, tin-foil wrapped hot dogs, and chips out on the grass next to the parking lot. Okay, good enough. Then the private university had an equivalent but less sporty tour and ended with lunch as well, tortellini and salad in a conference room with cloth covered tables. I thought to myself, if a college gives their prospective students pre-made-in-a-factory-somewhere hot dogs, is this reflective of the education they serve? Manufactured, one size fits all, get the job done cheaply and easily? So I decided to investigate further with the private college and spend a night there.

It was finals time which is the worst time to tour a college, and I recall my hosting "room mate" was gone all night studying. I was having some....umm...digestive issues which tainted my visit, but I did get to socialize, eat the cafeteria food (sub par but all you can eat!) and the like. I remember meeting a group of students that attended the alternative style school on campus; they were the drama geeks with pink hair, piercings, etc. I kind of liked that crowd, being a fellow (but tamer) drama geek. Their alternative-school-inside-the-school allowed you to create your own major and you didn't get grades but rather evaluations. It seemed to be my kind of place education wise, where freedom ran wild (and later to find nudity did too...eww...) and you could take control of your education.

Anyways, I chose the private university but not the alternative school inside it. See, I didn't have a clue what I wanted to do with my life, so how could I create my own major? And my transcripts being a short novel full of evaluations would not make an employer happy, nor my pocketbook for making copies of it. So I chose the "regular" part of the school, but did find out I could enroll in the alternative school for a few courses if there was room and they decided to let me in. I took dream interpretation, non traditional music and culture, scene painting, book arts, and yoga. Yeah... liberal hippy classes, lol. But the alternative classes appealed to me more and still kind of do; I'd rather take book arts- a multi media art course for 4 months than say, charcoal portraiture. I am a "global thinker" some have said, where I can't just do one thing one way, I think outside the box and bring in many methods, ideas, and answers to the party. Wilderness medicines just sounds cooler than chemistry. But alas, I never became a 100% alternative school student. I was considered an "honorary" student by some, but not all. See, you think "wow, a school where people are truly different, themselves, with spiked hair or wearing clogs or whatever...." but no, they were different just like everyone else. I once was invited to a party there by a good friend from high school, an invite only party. Well, he had me on the list but supposedly had to be at the gate to let me in and he'd just gone to get some food. The gate keeper, an "alternative lifestyle" female, refused to let me in. I told her "what, because I don't have manic panic magenta hair, the color of the week, you won't let me in". Yeah...that kind of tainted my status for a while. But I had a good point...

Anyways.... I recall being excited to meet people that enjoyed intelligent discourse but weren't always the snobby clicquish folks from high school. I loved staying up all night discussing forms of government, foreign cultures, author's theories... and yet I also felt like the stupid one of the group. See, some students felt they had to pepper their discussions with unnecessary verbosity, with terms like "banal", "meritorious", neo-this and neo-that, relativism, etc. Only later did I discover you don't have to sound like an elitist turd to be respected.

I do recall being the "poor kid". I was in a class where we were discussing income inequalities- we were a veeeeeery liberal college, after all. It was decided a family of four could not be "cultural" (i.e. go to museums, travel, send their child to college) on a 60,000 (US$) a year income. I was shocked, Growing up, I was the "wealthy" one, my parents weren't on public assistance and we owned a home. And oh my gosh, our income was hovering around, you guessed it, $60k. Well we were a family of three, but we had some medical bills and something like 2 dozen pets which added up. I was almost speechless, realizing in their eyes, I was poor. I recall even saying, "wait a minute, I'm in that income bracket and I went to colleges, traveled, and I'm here, aren't I?"

My freshman year was hard. I was shy and didn't make a singe friend. I was battling depression (yay genes, both sides of the family have it) and I couldn't decide my major and felt pressured. I explored some ideas and thought, I like kids, I like art....art therapist! I found a college in another state that offered that major and thought heck, I've nothing to lose, maybe a new place will mean no depression, new friends, etc. Well I was accepted and everything, chickened out, and stayed.

I found a few friends (none of which I've kept) and found a major- sociology. Although I never wanted to be a social worker and majored in sociology because I loved (and still love) exploring culture, art, languages, religion, history. Admittedly, I should have taken anthropology instead but that major was offered every other year and I was the wrong year. One thing I kind of noticed but not - something akin to "tip of the tongue" but rather "tip of thought" was.... social justice, class and race warfare. It was always poverty, minorities, blah blah blah. I'm all for equality, don't get me wrong. But not until about now did the "tip of thought" make sense of things. My school was all for "social justice" but NOT empowerment. It was more for liberal control. A utopian world that cannot be, and one where psychologists and social workers "fix" the problems of society....as they knew better. Yep....everything I'm now against, I was in the midst of in college. And at the time, I was all for it even though I felt that "tip of though", "something's fishy" feeling. Well, who isn't for helping others? I read Marx- he was a popular dude in college, I read about multiculturalism and all this stuff...and what is my point now? I seem to have lost it

So one thing I "got" from college that I've kept, was empowerment of myself. I was shy most of my college days, in fact I'd say I didn't "come out of my shell" much the entire time. But when I graduated, all my knowledge kid of backed up as if damned in, and neurons began firing and I started to not keep my opinions in. No, I was no loudmouth but sometimes I just had to challenge ideas. I enrolled in a credential program and actually spoke up in class sometimes. I completed my credential and then a few years later went for another but I was still a rather compliant student.
A little over two years ago I decided to get my Masters in Administration. I had to do a project with a partner (I hate group work) and got put in the reject group. Ok not exactly but everyone got to pick a partner and we were the two leftovers. We met to do our project and my partner was like minded, sensed something was wrong with our educational system and emailed me a book my John Taylor Gatto. I ignored it for a few months and then decided I needed something to read so I opened the attachment. Let's just say I read it all in one sitting. The Underground History of American Education is not a small book. 414 pages which I read without a single break. I think I didn't even sleep that night, after reading it, I was so excited. After that book, I became a loud mouth and an outsider, not fitting in with the system. But that's another topic, as I'm done with college for now.
Posted by 3rseduc / handsinthesoil at 6:21 AM