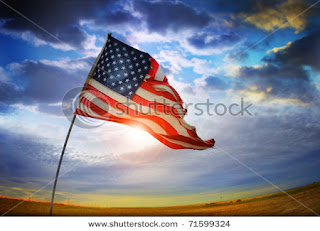 Today is Flag Day but does anyone celebrate it anymore, or care?

I am going to ramble here but bear with me.

I remember flag day as a child, in elementary school. It was a big deal. As a child for some reason I wasn't as patriotic as I am now, perhaps my mother's negative teacher-union perspective of Reagan tainted my patriotism? Who knows. Anyways, I still remember flag day though. I recall everyone school wide had to write an essay about "what the flag means to me" which meant kindergartners might have the teacher write "I love the flag" next to their drawing, but you get the idea. The principal would pick a winner for each grade and a school-wide winner. I don't recall if there was a prize but I know winners were announced on the loudspeaker and got to read their essay to the whole school. You got your 15 minutes of fame! Also, the school would file out onto the front lawn before school ended- to hear the winning essays, as well as sing patriotic songs and pledge to the huge flag on the pole. Even though I recall hating writing the essay for 7 years, I wanted to win. I also fondly recall singing the patriotic songs as many children wore red, white, and blue, hundreds of happy children on the lawn on a warm summer's day, singing under the large flag wiggling in the gentle breeze.

Does anyone celebrate anymore? Most schools are out by flag day but I have worked at a school that wasn't and no one even knew it was flag day. How sad.

What does the flag mean to you? I know our country isn't perfect. Many anti-American Americans mention all the atrocities Americans have committed. I know about these, I am not blind. Men, Americans, are not perfect. A country can't be perfect because it is comprised of people. Patriotism shouldn't be blind to history. But it should recognize what we have, and do, that others cannot. We have a Bill of Rights, a Declaration of Independence, a Constitution. We were groundbreakers in creating a country free from despotism, where men could become enlightened citizens, chasing their dreams, hopes, aspirations, where liberty and justice were and are, for all. Oppression was to be shut out, but yes we've oppressed people on our shores. Once again, America is comprised of imperfect human beings so we've had our mistakes. But many people under oppressive regimes, surviving victims of genocide, dream of nothing more than the American dream where, despite human failings which are natural, one can at least dream of possibilities and have a chance at them. A place where people don't need to be afraid of their every thought and action. A place where your voice is heard.

Some argue our country is headed away from this idea, some say it's never been. (All I say is, read our founding documents, follow your heart, and let both guide the nation.) Some say our country was ordained by a higher power to be, well, existent and others call that idea phooey. (Regardless, if God is omnipresent, he was there upon our nation's creation.) I cannot stress it enough, while our country is not perfect and never can be, it is a place to be recognized and honored. Yes there is room for improvement (so get to it!) but I dare any naysayer to talk to someone from a place "scarier" than here. Talk to an immigrant from, say, Cuba or Romania, Vietnam, El Salvador, or Eritrea. I dare you. Many Americans have become complacent to, well, America and its' ways so they know no different, so there is room for criticism. To that I say,gain a fresh perspective, and use your criticism for positive. And on this day, honor our flag for the positive it represents.
Posted by 3rseduc / handsinthesoil at 6:42 AM