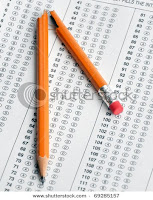 I am dreading the next two days. I get to administer, coordinate, etc the exit exam. This time around, it is for seniors and post- "grads" who have yet to pass the math and/or English exam.

These students are a mixed bag of pity. Most are special ed, and they don't "have" to pass to graduate now, (thank God someone had some common sense) but many want to pass it, or their parents want them to, so they take it. Again. And again. And again. By now they either know they won't pass and are feeling dejected, or they know they don't have to pass it and it is all just a routine. Or worse, they want to pass it and try their darndest but just can't do it. You see the struggle on their faces as they test, the worry, the fear, the "crap I don't know any of this" look. ne student this year took it for the first time, walked in confident and when she was the second to last testing, she put her pencil down and said "I don't know any of this. I am so unprepared. This is so hard. I give up. Can I, Mrs. D? Can I just stop and try again some other time?"

You also get the checked out kids. They take it 'cause they have to but they are soooo done with school. They don't see the validity of passing, thus earning a diploma. They've told me that they'll just go on welfare or sell drugs or be a border crossing coyote. And they're serious. To then its some stupid test, another hoop not worth crossing through.

And then I think of one student in particular who was special ed but exited. This student , "X" struggles with math immensely. A good student, X takes about 5 minutes per question. X analyzes it and goes through every scenario, possibility, equation, and weird pattern ever thought of to try and get the answer. Then comes the look of doom and gloom. And a single tear and a silent scream, at which point I ask if X would like to leave the room and go scream and then come back. I share my terrible experiences with math and offer hope. X then asks me weekly if the results are in, as do the parents. And then come the results.....3 points closer this time! But still 11 away from passing! Work on skill ___ and ____ and you will pass! You're close!

And the adult students come in, with menial jobs, a life outside high school, full of fear. I think all but one adult student attending this time is on their last try...you get a certain # of years to pass it before you just....don't pass, no diploma, sorry. They disrupt the exam, talking, and who can blame them? They feel like idiots, an adult stuck with little kiddos taking some stupid exam. Everyone knows they haven't passed it and so what a morale cruncher. If they were going to pass, they won't now because they feel like dummies and it is a self fulfilling prophecy.
Posted by 3rseduc / handsinthesoil at 3:31 PM

Email ThisBlogThis!Share to TwitterShare to FacebookShare to Pinterest
Labels: testing