The Progressives sought social control and I finally "get" why they did, even though I am vehemently against it. They saw the Fall of Rome so to say, with industrialization tearing our country asunder...capitalism begat greed, the classes were dividing, families values decreasing, crime increasing...so on and so forth. This really came to a head during the Great Depression, when a society as mentioned, faced with economic crisis, spun further down. I agree with the Progressives so far. Our society is going to hell in a hand basket. But here is where Progressives and myself part, and it is a "biggie".

Progressives feel that through social control, a Utopian- or at the very least an improved- society will result. Through soc 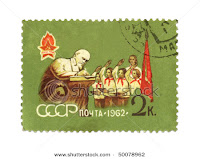 ial efficiency and everything towards the collective greater good, this Utopia would come about. They also encouraged a (often violent) destruction of the ruling class (except for the few elite Progressives who were suggesting these ideas, and were in fact in charge, the "elite experts" who would manage the transformation of the social order...they apparently were exempt)...a Marxist idea they knew of, but was rekindled during visits to Russia during the Bolshevik Revolution.

This relates to education in many ways, but to promote brevity for once, by having a managed education through social efficiency, everyone's place in society will be set in stone, and everyone will be happy as individuality and greed will disappear, collectivism will promote everyone to do what is beneficial to all.

What I believe is the "chaos coalition". Social control is denying man of freedom, individuality, and free will. This is the antithesis of Americanism, our Founding Fathers created a haven, America, free of despotism, a place where man could pursue his happiness. If we deny progressive ideas and actually give an "elitist", "classical" education to ALL students, an environment of learned, enlightened individuals (and society), imagine the things we could do! With the "chaos" of freedom of learning, we could have even more Einsteins, MLK Jrs, Nobel Prize winners... and I see education as a way to lessen poverty, crime, and other social ails. Knowledge is power and who are we do deny, or "control" that?
Posted by 3rseduc / handsinthesoil at 8:52 PM