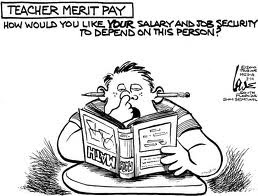 I am reading a book by Terry Moe, “Special Interest” and part way through, I just had to blog about it. This kind of connects to my prior post,http://3rseduc.blogspot.com/2011/10/cheating-is-crime-you-will-be-punished.html

Should teachers be held accountable for student achievement? Of all union teachers surveyed, 40% support this notion and 60% oppose it. Of the rare breed of non-union teachers, 52% support this and 48% do not. So I got to thinking, well, what do I think?

I would have to abstain from answering in yes or no format. See, student achievement is part of teacher success, just like patient satisfaction and non-death rates is for doctors, for example. As much as I hate to make a business comparison to schools and children, they are a teacher’s client and product so there should be some accountability.

A similar question on the survey was, “use tests to measure achievement?” with a support/do not support response. Of all union teachers, 19% support it and 81% oppose it, and of non-union teachers, 29% support ad 71% oppose. The author argues that student achievement, especially via test scores, does, and should, matter. Teachers should be held accountable.

I say…kind of. I argue that standardized tests only test a certain amount and kind of knowledge. Tests have some validity, but the current weight given on just one test is ludicrous. I feel that the tests do not assess critical thinking, creativity, innovation… most 21st century skills, and those skills that colleges and employers look for and find lacking in today’s youth. Therefore, a blended model seems ideal, one that includes test scores (because yes, it is important to know if Billy knows how to add, how to spell, and certain common knowledge facts like what are the Bill of Rights, why does the sun rise, etc), and other “assessments”. By that I mean portfolios, projects, essays, presentation

s- things you would see and use outside of school. Yes, adults take assessments in the workplace but they do more than that. And skills and intellect are more than just a test.

Also, we need to look at skills growth over time. An argument I hear teachers use, which I agree with, is that it is unfair to judge a teacher by his or her students. What I at least mean by this is, let’s say you are Teacher X and PVE, Prison View Elementary. Your children are all on free lunch, half are learning English, and they are on average, 2 grades below grade level. Due to poverty, mobility is high and so you end the school year with only 1/5 of the students you started with. Ok let’s also look at Teacher Y at PME, Prestigious Millionaire Elementary. Your students take IB courses, have private tutors, no one has free lunch, all speak other languages but that is due to private lessons to learn a language aside from English and…you get the point. Testing season comes and goes and X’s students at PVE are skewed so that 85% are basic and below. Y’s students at PME are skewed so that 85% are proficient and above. So with the logic of testing and teacher accountability in place, X is fired and Y gets a bonus. Is that fair?

But on the flip side, can teachers solely blame society’s ails on student performance? I am the first to notice demographics, a culture that does not value education, etc. It is my nature as a sociologist and data person. These are indeed HUGE factors in performance. We do need to work in changing our culture to value education, we need poverty to dwindle, blab la bla. I agree. BUT a teacher should have SOME accountability. First, she/he should be held accountable via test scores (and my blended model of other “assessments”). But it should not be via raw scores or percent proficient, but rather, growth. If Teacher X has 5 students who all scored 25% correct at the end of last year, and then under her guidance and teaching, scores 55% this year, shouldn’t there be some praise? Instead of our current and proposed models, saying “hey, X, those 5 kids are still “basic” and not the NCLB necessary proficient, bad-soundung buzz, fail, you are fired” they should praise growth. And Teacher Y, whose 5 students which scores 59%, basic, last year, and under her guidance scored….hmm… 60%, yay, proficient this year, should not be rewarded for “more proficiency” when the growth was only 1%, statistically invalid.

Culture, life at home, etc is certainly a large factor in educational attainment. A teacher cannot perform miracles on 100% of students. But then I think of Shanti Bhavan in India, which takes the Untouchables- kids way worse off than our worst at risk students, and educates them and guess what? They do great in school and become professors, engineers, doctors. Above all odds. Because of a teacher. But this cannot be quite replicated in America. Why? If our kids fail school, they will just go sell drugs or go on welfare. They will still have a home (perhaps a rented trailer, but it is a home nevertheless), food via EBT (you can get filet mignon and éclairs!), a tv, a cell phone, clothes….so why get an educati

on, work your butt off, to buy the same lifestyle? In India, for these untouchables, without an education they face true dire poverty, starvation, death. So that is a motivator. However, I do argue the case that if Shanti Bhavan can do what they do, we, us American educators, can do something. We need to be held somewhat accountable because hello, we’re educators, educating. If we can’t at least help some kids succeed, why the &&%$ are we in the classroom?

But of course teachers in general will never support accountability based on student performance of any kind. Why? Unions. Unions were initiated to protect against the rare cases of abuse, i.e. 14 hour days without a break, parents suing over use of “emotionally damaging” red correcting pens, etc. Worker’s rights laws now exist, in and out of unions, to protect from this. However, unions today have gone beyond that and into protecting jobs at all costs. A teacher can cheat or even worse, physically harm students and keep a job ,or at least remain either in the classroom, or on paid leave, for years until the union can justify ridding of them. So of course teachers want no accountability because that could be an eventual threat to their job security. But how can they be so selfish? To let job security trump a child’s education?

Also, no one seems to mention the disposables. The teachers that are pre-tenure. They pay union dues but have little to no protection. Due to LIFO, they are the first to be let go in a budget crisis. Maybe their test scores are equal or better compared to the neighboring classroom, but merely because of (lack of) seniority, they’re gone. They don’t have to molest children to be placed on paid administrative leave for two years. No. They don’t have to do anything, they could be a model teacher, and they’re let go without cause. But because they’re new and thus inexperienced, dumb, second class citizens, who cares? They aren’t the great ones, the master, tenured teachers. They haven’t worked their way up, so who cares about them? And if they get laid off, better them than me. A common mentality which I have actually heard teachers discuss is, “no I won’t cut my pay for the probationary staff to keep their jobs. I need my full income, and at least it is not me losing my job. Besides, they’re new teachers, so they’re not as good at teaching as I am. So I deserve to keep my job.”
Posted by 3rseduc / handsinthesoil at 11:10 AM