the budget crisis, master planned, not my problem 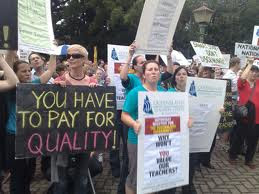 Perhaps the budget cuts in education are on purpose. Yes, many top-notch-education countries spend less for better results, and yet our schools ask for more funding. That is an issue for another post and topic. I am talking instead about the cause of the budget crisis in education.

While reading Terry Moe's book, Special Interest, I had a possible epiphany; a perfect storm that was master planned, has given us this crisis. One may think, isn't that a shooting oneself in the foot kind of situation? Not quite.

Teachers are humans, want to be treated as such, and want- and deserve- benefits like health insurance, livable salary, etc. The average teaching salary has only increased 7 percent from 1980-2007. Education funding has not drastically lessened enough to excuse such a piddly salary rise so what is the issue? Well, teachers want smaller class size and got it- from nearly 1955 to a little over 2007-08 (I argue is not so privileged). Therefore we are paying for more staff thus no salary boost.

With tens of thousands of teachers laid off in recent years, perhaps we're reaching equilibrium and can have a higher salary- at the cost of class size. Perhaps the research claiming class size is no issue is fabricated to support this paradigm shift, albeit manufactured. You can't always get what you want but hey a cola salary up tick may be in your future.

But wait, so we’re laying off teachers; is that to raise class size and salary? Remember it is hard to even a tenured teacher with seniority so who can you get rid of? The union paying but not represented, at will, LIFO probationary teachers. They’re new and inexperienced anyways, pshaw, who wants that? How can we improve education with them around? Granted, they mostly staff the at risk failing schools but those are lined up to fail under NCLB, to be taken over anyways. Who cares about the poor kids, they are that dreaded achievement gap we don’t like. Who cares?

Another reason for budget cuts- and motivation to rid of teachers- is those dreaded retirement benefits. Unions attract members because, wow, as a union teacher you can retire before 65 with a full health package! That sounds great except that insurance costs are skyrocketing. LAUSD estimates that in the nebulous future, 80 percent of their entire yes entire budget will fund just retiree's insurance. estimates twice their budget is needed for the health coverage alone. For LAUSD, that means funds for books, teacher salary, buildings, etc will be severely cut, only 20 percent of funds allocated will pay for basically everything. Whose hair-brained idea is this? Well, board members, unions, districts appease staff with benefits. By the time the financial ramifications of these benefits come about, all those who decided the benefits are gone and it is someone else's problem. Those someone else's cant say no to staff, there would be outright war so they pass the buck on to the next guy. Pretty soon you're at a crucial crux, now, and who knows what will happen. Who knows, but staff, students, stakeholders will all suffer from well intended bad decisions.