Families: An Individual Unit of Threat 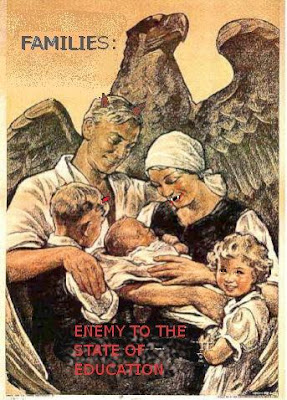 Families: An Individual Unit of Threat.....
William Torrey Harris is a man I believe I've spoken of before...search for the William Torrey tag for an intro.

He proposed that the right type of moral education could not be found in the home nor private tutors; only in public schools could scholars learn the disciplined behavior necessary for life in a civilized society. Progressive leaders believed that they understood society best because they understood psychology, sociology, and pedagogy. Given their "superior understandings" of everything social and economic, they had the power to control schools.

This means that the nanny state knows best, a Progressive idea that the elitists in power know best because, well, they do. They have the elite education, experience, money, and IQ qualifying them to manage the masses. Really, I think it is a fear of loss of control. If families raise their children i.e. by taking them to church, teaching them morals, and God forbid, homeschooling. they are not regulated and are a threat. Those in power threaten such ideas by saying those not raised by the state are ignorant, unsocialized, self-ostracized members of society that need to be controlled to "fit in" and be "civilized".

Progressives wanted to create a Utopian society free of crime, poverty, and social ails. To do so, individualism had to be replaced with collectivism. Education was not for the good of the child but for the good of the community. Family, not under control, could detract from such a goal, being a free and individual unit of control.