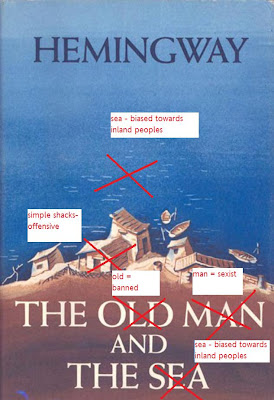 From http://www.huffingtonpost.com/john-merrow/an-act-of-war_b_922251.html a little bit of my two cents... Ok, a lot, and I will meander about, but here goes.

Students like to read in first grade and do well. It's a novelty, a new talent that they gladly embrace. By 4th grade they detest reading as the author points out, and scores plummet. Why?

Many schools do not allow reading outside the textbook or mandated curriculum. Or they do, but there's no time for it. I dare you to find a Language Arts textbook and read some stories. As Diane Ravitch has pointed out in The Language Police, we basically whitewash literature. http://www.catholiceducation.org/articles/education/ed0190.html lists some of the things Ravitch found to be banned from books, so that stories cannot include the following (plus many many more)some being just silly, others making stories dull, and others that just....well you'l see: bookworm ,busybody, the elderly (must use "older people), fanantic, Founding Fathers, insane, majority group, Middle east, polo, senior citizen, sect, tomboy, yacht.

And topics/ideas banned...here's where I find it the most interesting.....imagine stories without....Women portrayed as teachers, mothers, nurses, and/or secretaries, Women as more nurturing than men, Men playing sports, working with tools, Men and boys larger and heavier than women and girls, Girls as peaceful, emotional, warm (but too aggressive is banned too), Boys as strong, rough, competitive, African-Americans in crowded tenements on chaotic streets; in big, bright cars; in abandoned buildings with broken windows and wash hanging out; or living in innocuous, dull white-picket-fence neighborhoods (so where do they live? Leaving just skyscrapers or mansions I suspect.), Native Americans performing a rain dance, Native Americans living in rural settings on reservations, Native Americans portrayed as people who live in harmony with nature, (so let's deny their culture....), Hispanics who are warm, expressive, and emotional, Older people in nursing homes or with canes, walkers, wheelchairs, orthopedic shoes, or eyeglasses, Older people who are retired, are at the end of their careers, have lived the most fruitful years of their lives, or are engaged in a life of leisure activities, Older people who are fishing, baking, knitting, whittling, reminiscing, rocking in chairs, or watching television.

Ok that alone, and my links alone are but a partial list. Yet they paint an unrealistic portrait of the world outside the classroom. I'm not promoting racist or sexist literature but also not unrealistic literature. The Old Man and The Sea would be dwindled down to about a paragraph since old...I mean elderly....I mean...those of advanced years are not allowed to fish. The Lewis and Clark story would probably also be a paragraph long.

Add in the idea of sight words and a set vocabulary and wow....not only is the old man and the sea restricted to "a grandfatherly figure sets out to complete a goal, performing sports activities on a body of water" . Upon completion of the goal, the grandfatherly figure (does not rest) consumes a non offensive beverage and (does not dream)." But now you must insert the sight words...so, using actual California sight words antique
equivalent
qualify
quantity
quite
request
its
night
break
equal

Admittedly, I found the classic version of the story kind of dull, I humbly admit. But I read it and appreciated it. And if Hemingway's story must be made into the paragraph I wrote above, it is doing an injustice to our culture, history, humanities, intellectual pursuits and so much more.

Imagine a story (which I find more interesting) such as Antigone, Lord of the Flies, The GRapes of Wrath, re-written to fit textbook specifications. Just imagine. There would be little to no story, nothing would really make sense or reflect reality. The story would be pointless.

And we wonder why children find reading boring.

Email ThisBlogThis!Share to TwitterShare to FacebookShare to Pinterest
Labels: reading