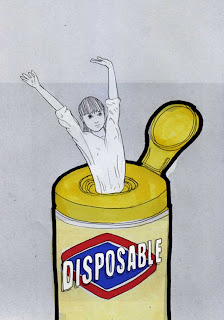 I'd previously posted about LIFO or Last In First Out, the (union) practice that non-tenured teachers, regardless of certification, quality, etc. But to summarize in case you are not well versed,
LIFO in short is a layoff policy of the vast majority of unionized teaching districts. Once a teacher receives tenure (years of service vary by location) it protects their job, making them hard to fire/lay off. That means the probationary, non-tenured teachers lack this protection and are thus expendable. This is thought of as fair practice, and that more experience = more quality. Therefore, during budget cuts, the first jobs to be tossed are the "newest" teachers, last in is first out.
LIFO means the job market is full of many LIFO victims.
Many jobs require certain years of experience but how can one get experience with LIFO intact?
Add to this, some schools will only hire if you are CURRENTLY employed. I recently applied to teach overseas (the organization shall remain anonymous) and they quite rudely said (paraprasing here), "sorry, we only accept candidates who are currently employed as full-time teachers and we see you haven't been employed since 2010 so we cannot make an exception for you. Apply elsewhere." So, how can one get a job if you must have a job to get hired?
But wait! There's more! There is a myth out there that I'd discussed a little in past posts, that there is a "teacher shortage/crisis" which is a bunch of bull feces. To add to this, teachers from overseas are hired via visa, to work in these hard-to-fill positions. I recall a few years back I applied to district X because they had published in the local newspaper, the need to fill positions in this terrible teacher shortage crisis. I instantly applied and received the usual nasty gram " thanks but no thanks, you met our qualifications but we're seeking other candidates".
A week or so later, the same newspaper contained an article on how District X could not find enough qualified teachers to staff their needed positions so they had to seek candidates in the Phillipines, which were thus hired.
I wrote a letter to the editor and everything about this ludicrous lie they were perpetuating just to save a buck.
And this issue reared its ugly head again just yesterday, as I browsed HuffPo. I found some older articles on the abuse of the foreign teachers at http://www.tulanelink.com/tulanelink/filipinoteachers_box.htm and http://www.usatoday.com/news/education/2008-10-22-foreign-teachers_N.htm to name a few.... there are plenty more out there.
Shortage my arse. I recently interviewed District Y and found they had approximately 95 qualified applicants per special education position.
Apparently, 95 qualified applicants constitutes a "shortage" and a newsworthy "crisis" as well as the need to ignore AMERICAN workers in AMERICA and hire teachers from ANOTHER COUNTRY to fill the positions since, well, there is a shortage after all.
So let me get this straight. We keep the tenured expensive teachers since they have stronger than superglue union clout. We rid of non-tenured cheap teachers through LIFO. Some schools even refuse to hire unemployed teachers, while many I've interviewed for question those with "a year here, two years there" on their resume, evidence of their LIFO victimization. Then districts save even more money by hiring foreigners on visas and paying them even less than a beginning American teacher. And they (the districts) have the audacity to ask tax payers for more money!
I do see one iota of "fairness" in this practice though. Districts treat both LIFO teachers and tiehr cheaper foreign replacements like complete trash.
then whine, complain, and get outright militantly demanding about needing more money.
I'm fuming with anger. Such indignation!
Posted by 3rseduc / handsinthesoil at 9:53 AM

Email ThisBlogThis!Share to TwitterShare to FacebookShare to Pinterest
Labels: jobs