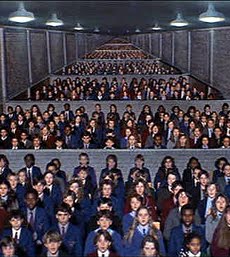 I made myself sick today. I found out P - 20 isn't preschool-20 (college) as I thought. Oregon, Michigan, Kansas ( and likely every state) have websites about P - 20 which state it is prenatal - college. Yes, prenatal. To quote http://www.michiganschildren.org/Speaking-Up-For-Kids/what-is-p-20.html,


"p 20 is a cradle-to-career approach to education recognizing that education does not start and end at the classroom door".


Yes....no sugarcoating here, they overtly mentioned a government sanctioning of cradle to grave control.
Here I thought all along, phew I have my kiddos until pre-school or kindergarten. I have them for their most influential formative years, go me! Take that, government! My dreams were shattered today. No longer are my children my own, but part of the state, parens patriae, the idea of the state as parent, since, apparently, these elitist experts know best. No more mommy knows best...this world is too "complicated" for us simple folks, an idea dating back to the Utopian goals of the Progressive Era and the notion of social efficiency.

Let me provide a disclaimer and interjection. I do not inherently see a problem with prenatal care and early childhood education. Our infant mortality rate and pregnancy complication rates are quite dismal for a first-world country. As a mother of two, I am all for prenatal care. As a teacher, I am all for early childhood education. During my first year of teaching, I found out that many kindergartners in my poverty stricken school neighborhood came to school utterly unprepared. Many had never used crayons or held a pencil. They had never even heard the ABCs and did not know their own name (often called mijo/a, baby, etc at home). I kid you not. These children are the most in need of intervention and the most targeted for such things. Therefore I wish to reiterate that I advocate prenatal care and early learning.

But if history means a darned thing, this scares me... targeting the most at risk populations can mean they receive a stellar education that teaches them to think, ask questions, create, innovate, argue. Or it can teach them job skills like how to ring up a burger and fries and how to operate a vacuum, you know, skills that CC offers through the 70% weight of informative text in Language Arts courses.

The idea of scientifically managing the population to control them, as part of a Utopia, is hardly new. It originated in Prussia (see http://3rseduc.blogspot.com/search?q=prussia for background info on Prussia's influence on our education system) as noted at http://www.lewrockwell.com/2010/09/john-taylor-gatto/the-prussian-connection/ A concept called

"psychological parenthood" began to take shape, a radical notion without legal precedent that would be used down the road to support drastic forcible intervention into family life. It became one of the basic justifications offered during the period of mass immigration for a compulsion law intended to put children under the thrall of so-called scientific parenting in schools"


This idea that the families of the nation were ill-equipped to raise children; that scientific management thereof could save us, is prominent in the past and perhaps today.

in "Education for social efficiency: a study in the social relations of education" By Irving King (1915),


"It was devised as a means of insuring that the child should learn certain things which he would not be able to learn satisfactorily if he were left to pick up things for himself by imitation and simple contact with the life that was going on daily about him. As culture increased in complexity, more and more of the burden of education had to be shifted to formal agencies, specifically to the school"


From the same document,

"And this education must be largely wrought out through the school. The ideal of a social life adequate to modern conditions of living must take its place as an object of explicit and conscious training, just because it is too complex and difficult to attain in any other way"


For a nice outline of the Progressive Era and the influence on society and education, visit http://people.uncw.edu/ricej/education/The%20Progressive%20Era%202%20Social%20Efficiency.htm

As the Progressive Era rolled in, social efficiency reared its ugly head. I don't like using wikipedia as a reliable source, but instead of quoting ten separate sources to validate wiki, I will give you the wiki definition of social efficiency- I could not have said it better.


Social efficiency educators" such as theorists Ross, Bobbitt, Gilbreth, Taylor, and Thorndike were aiming to design a curriculum that would optimize the “social utility” of each individual in a society. By using education as an efficiency tool, these theorists believed that society could be controlled. Students would be scientifically evaluated (such as IQ tests), and educated towards their predicted role in society. This involved the introduction of vocational and junior high schools to address the curriculum designed around specific life activities that correlate with each student’s societal future. The socially efficient curriculum would consist of minute parts or tasks that together formed a bigger concept. This educational view was somewhat derived with the efficiency of factories which could simultaneously produce able factory workers. Critics believe this model has too much emphasis on testing and separating students based on the results of that testing.

Social efficiency keeps at it; A.H. Lauchner, a principal in 1951, said,


"not every child has to read, figure, write and spell...that many of them cannot or will not master these chores."


Meaning, why teach true academic curriculum to certain children to whom it would be a waste?

Okay so my point here is this, social efficiency used the "science" of test scores to drive curriculum to scientifically manage the populace, to determine which students were to be doctors and which were to be laborers. With the p-20 data tracking system, a student with behavioral issues, an IEP, low math test scores may be pigeonholed- on purpose- into becoming a manual laborer, even if their dreams and skills are in interpreting law or motivating students or what have you.

Sire, you say, this cannot happen. Or perhaps it is an old fuddy duddy idea that never came to fruition and never will. To re-quote one of my posts from this year,


"The workforce sector wants information about prior training in
high school and postsecondary institutions as a foundation for
working with both education sectors to address identified skill gaps
in the workforce, as well as to identify equity gaps with respect
to demographic representativeness by job category. Knowing the
education sectors’ capacity to respond (i.e., by increasing the flow
of graduates with particular skill sets) will also help the state decide
whether to invest in education to address skill gaps or establish
incentives to induce more workers with needed skills to move
into the state. Moreover, linking with the education sectors would
provide labor market analysts with a wealth of data that would be
useful for examining equity in employment."


This document is a modern document, written sometime between 2009-2013, and it states that schools can increase the flow of graduates with certain skills. How might they do this? If society needs more engineers, or fast food workers, how will it "increase the flow" without either data manipulation (suddenly Johnny's test scores plummet and his education is individualized to send him into fast food) or using tracking to label students (everyone who struggled in science gets to work in fast f

Your Secret is Safe With me

Everyone keepos saying the data collected will remain anonymous, and will solely be used to improve prenatal care, career readiness programs, etc, But of course the data will be shared with any government organization or third party vendor or person in education (textbook companies, educational consultants) which will remain anonymous once out of the school level. Students will be numbered, data will be meta data, and it will be secure. (Just like our IRS records, social security info, etc which surely has never been compromised...ha ha).

"Anonymous" meta data is extrapolated from identifiable data, those "80% have graduated on time" had names and identities attached to them.  Collect some meta data such as addresses, parent's names, etc and enough datamanipulating can lead back to the student. Or, if anyone decides to be evil, a school official could leak identifiable student data, or how to access it (ie that student #642t50 is Jane Plain). But don't worry,,,your data is "safe".

Which leads back to social efficiency... whitehouse.gov had said,


Yep, right back to pigeonholing students in a certain direction as part of social efficiency, or as we call it now, human capital.  From http://www.csctulsa.org/content.php?p=195 we bring you,

The P-20 concept is a way of thinking and acting that promotes systematic aligning of multiple education, health, and social support resources to best advance human capital development from prenatal through postsecondary and employment, and on to sustained lifelong well-being...


See, my long-winded post does all come together right there. And it scares me. It is wrapped up in a pretty package- who doesn't want "sustained lifelong well-being"? But the question is, who decides what well-being means? Perception is everything and one man's well being could be another man's hell. Is the government's idea of my well being what I desire? Likely not, since obviously life- and my own well being- are "human capital" and must be micromanaged and decided for me.